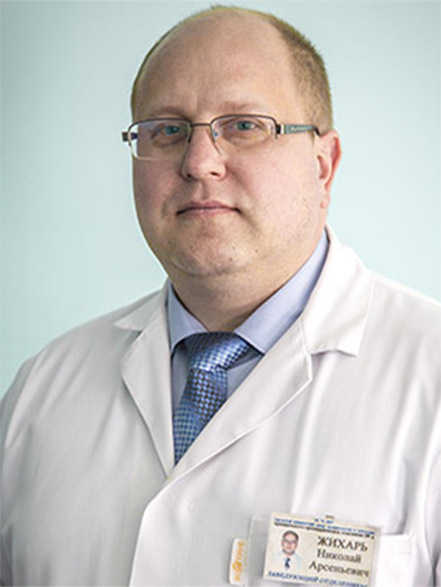 Head of Traumatology and Orthopedic Unit No. 4, Traumatologist-Orthopedist of the highest category

Dr. Zhikhar is an experienced and highly-qualified specialist, who applies the latest methods of diagnosis and surgical treatment of children and adults with injuries and diseases of the musculoskeletal system. When on duty, he provides emergency care to the patients with traumas and injuries.

Dr. Zhikhar participates in conferences and meetings of the Scientific Association of Trauma and Orthopedic Surgeons. He took postgraduate trainings at Belarusian Medical Academy of Post-Graduate Education. In 2008, he was awarded the higher qualification category in Trauma and Orthopedics.

He is involved into public activities and is the chairperson of the primary organization of Belaya Rus Public Association of the 6th City Clinical Hospital. Dr. Zhikhar also carries out scientific and research activities. On October 29, 2014, he defended the dissertation “Diagnosis and treatment of comminuted intra-articular fractures of the distal humerus in adults” and received PhD in Medicine. 12 of his scientific works were published, including one monograph. Dr. Zhikhar is a diligent, responsible and dedicated employee.